Baosheng Emperor’s surname is Wu; given name is Ben (979-1036). His other honorifics: Wu Chen-jen (immortal), Wu Chen-chun, Hua-chiao Gung, etc. His courtesy name is Hua-chi; his style name is Yun-chung. A native of Pai-chiao Village of Tung-an County in Chuan-chou Prefecture, Fu-jian Province, he was born on the 15th day of the third moon in year 4 of the Taiping Hsing-kuo period (979) of Northern Sung Dynasty’s Tai-tzung reign. Born as a smart child with good memory, he studied extensively and memorized numerous books; his specialty was traditional Chinese medicine. At the age of 17, he was taken by some extraordinary person to have an audience with Goddess of the West, who taught him how to exorcise evil spirits. At the age of 24, he passed the provincial examination, and then served as a controlling inspector. He later on resigned to retirement and cultivated himself at Mt. Ta-yen in Pai-chiao. A lifelong vegetarian, he was never married. As a medicine man, he had saved countless people’s lives. On the 2nd day of the 5th moon in year 3 of Ching-you period (1036) of Sung Jen-tzung reign, as he had attained the perfect Way, fairy cranes came to pick him up. His country folks kneeled down and witnessed his ascension in the middle of the day. He was 58 years of age.

During his lifetime, Baosheng Emperor (Dadi) was known to have done medical miracles. For instance, he had applied eye drops to a dragon’s eye and removed foreign object from a tiger’s throat. After his ascension, Dadi repeatedly displayed his divine powers, which assisted the nation as well as the people. When Sung Kao-tzung was the crown prince and sent to be a hostage at the Jin Court, it was Dadi’s divine presence that saved Kao-tzung and escorted him back to China. After Kao-tzung had ascended the throne, he ordered the founding of a temple (the ancestral temple for Baosheng Emperor) and bestowed the title of Great Tao Immortal on Dadi.

Ming Cheng-tzu’s Empress Wen suffered from breast ailment and her imperial doctors had no cure. Dadi appeared as a Taoist priest and came to the rescue. He felt the empress’s pulse through a silk string and then cured her. Cheng-tzu wanted to compensate Dadi with gold, but Dadi declined and rode away on a crane. Cheng-tzu then expressed the appreciation by conferring the title of “Imperial Inspector at Heavenly Gate, Miracle Doctor of Compassion Relief, Great Taoist Immortal, and the Long-lived, Unbounded, Life-guarding Emperor.” Imperial robe and palace were also conferred upon Dadi. Dadi cured serious diseases and relieved many people; he was revered as the god of medicine. 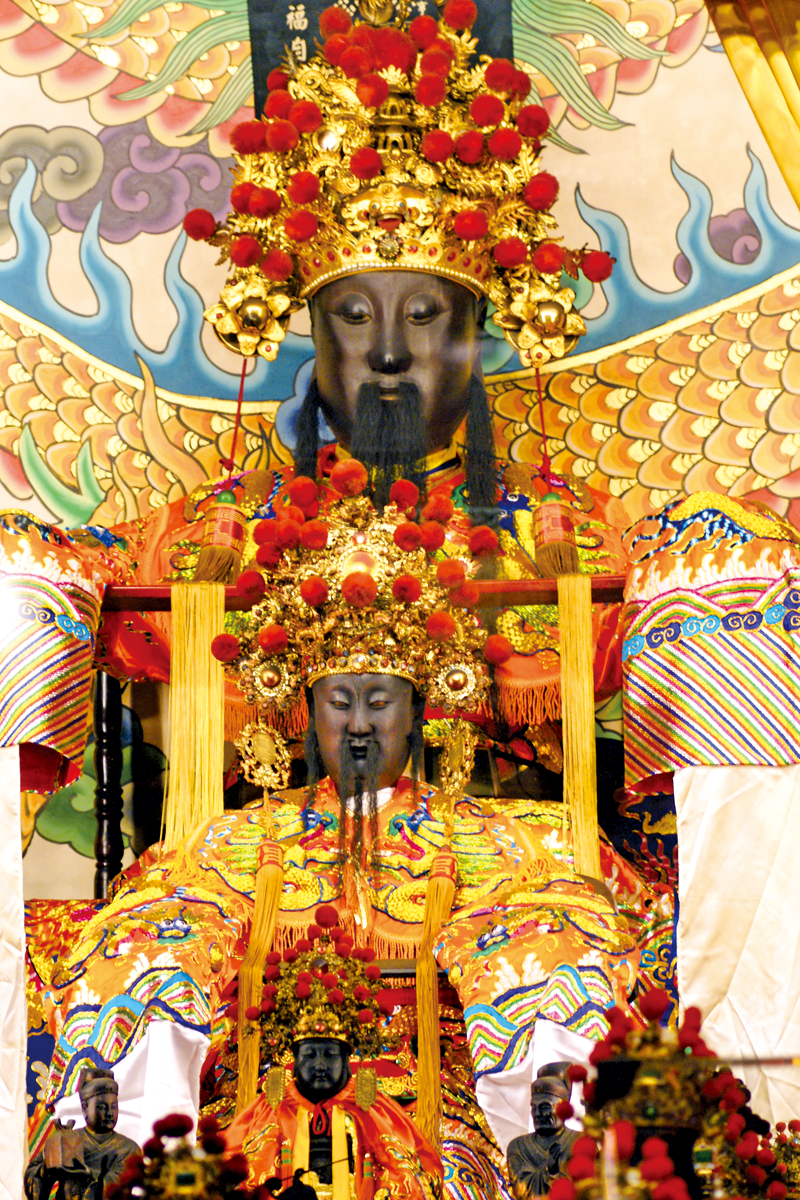 Baosheng Dadi is guarded by the Thirty-Six Celestial Officials, whose figures were sculpted by Master Hsu Yen of Chuanzhou during 1829 ~ 1833 (9 to 13th, Emperor Daoguang, Qing dynasty). Each figure has one different animal ride depicted in vivid style, placed on the right and left sides of the Main Hall.

He is also called "Master General", which is different from "Tiger Lord" in folklore. His figure is sculpted in stone or wood and worshipped under the altar of Baosheng Dadi in the Main Hall. It is said that in the Song dynasty, a tiger once ate a woman, Since her hairpin pierced his throat, he felt in great pain. The tiger went to ask Master Wu for help. Master Wu rebuked him "It is the punishment from Heaven for killing people and animals. I can't save you. "The tiger did not leave, just stayed and lowered his head to repent what he had done. Touched by his sincerity, Master Wu then cured him. To thank Master Wu for his kindness, the tiger stayed by his side from then on. When the tiger was alive, he served Master Wu as his ride; after death, he still protected him loyalty. Thus, Master Wu transformed the fierce tiger into a deity. Since then, on every April 16, the ceremony of "General Tiger" is observed. He is thus honored as the "General Black Tiger".

Also known as the five-grain late-emperor, emperor-king of medicine, Mr. five grains, the late-emperor lord, epoch-era Yan emperor, Yan emperor Sir Shengnong, king of five grains, and king of millet, Shengnong Emperor is the same as the legendary Sir Shengnong. His surname is Chiang. Born in Li-hsiang, he grew up in the Chiang River area. Legend has it that: When his mother was visiting Hua-yang, she had a glimpse of the head of a dragon and then she went back home and got pregnant. Shengnong had a rather strange look: he was born bull-headed.

Sir Shengnong invented farming tools and taught people how to open up land and grow grains, so that people learned to shift from hunting to farming. He tasted all kinds of herbs while categorizing them; he also treated people’s illness. The Shengnong figurine that people worship usually has bare upper body, with ears of rice grain in his hand. Wearing tree leaves around the waist, the figurine has a primitive look that is quite different from the legendary image –“bull-headed body.” 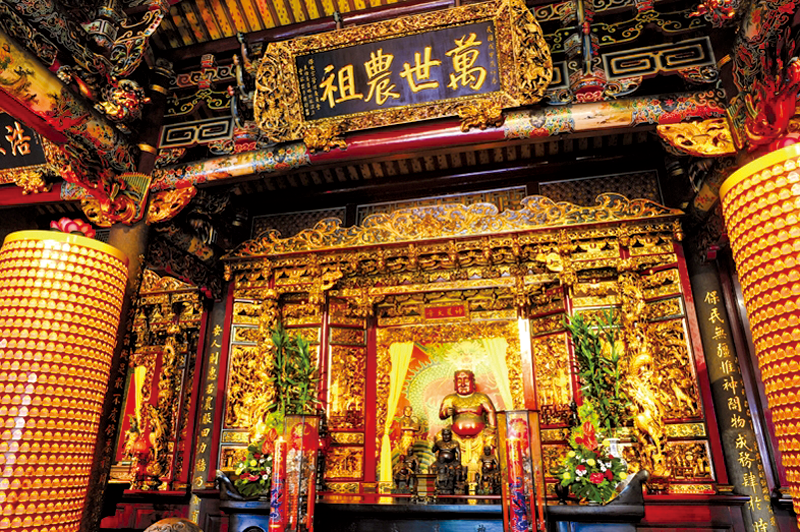 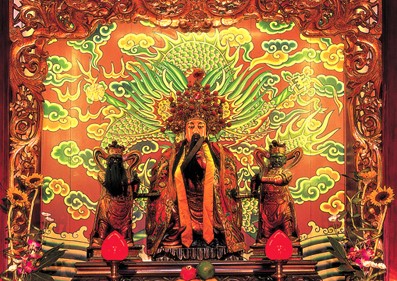 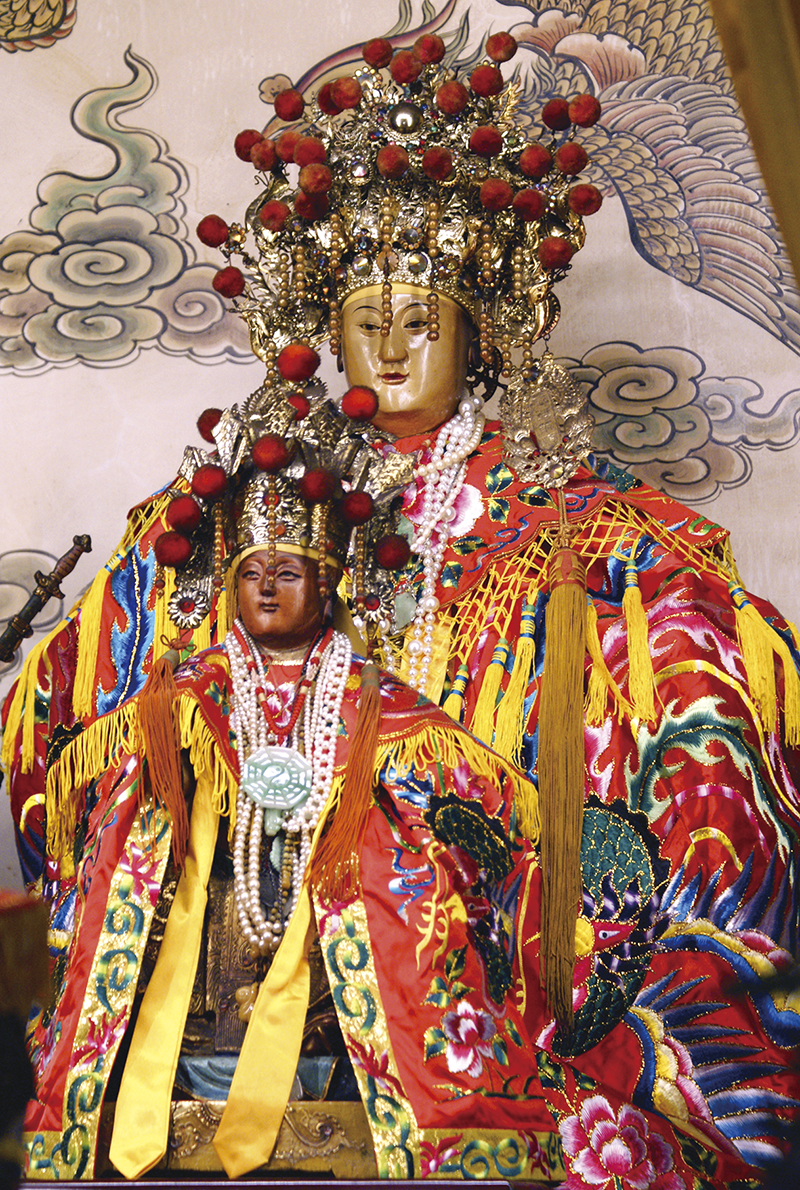 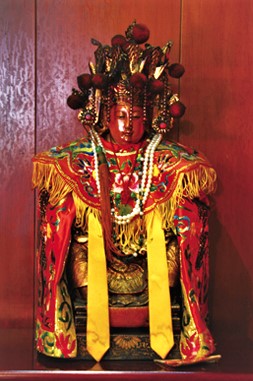 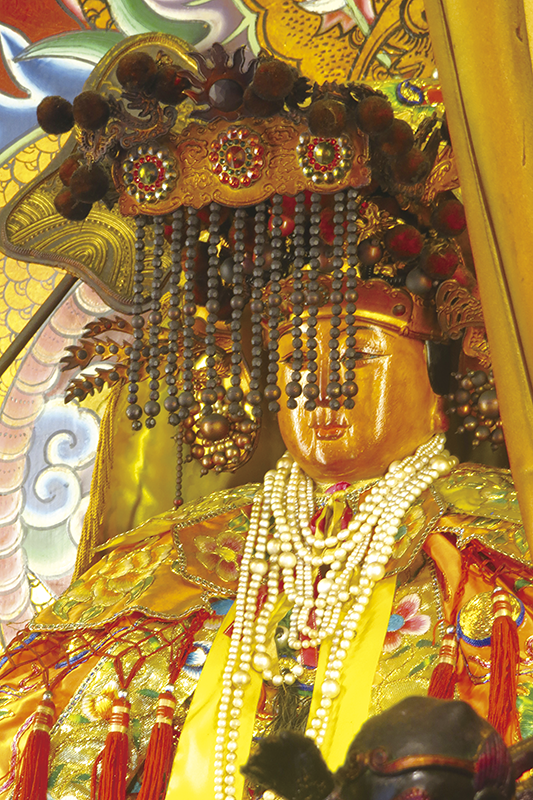 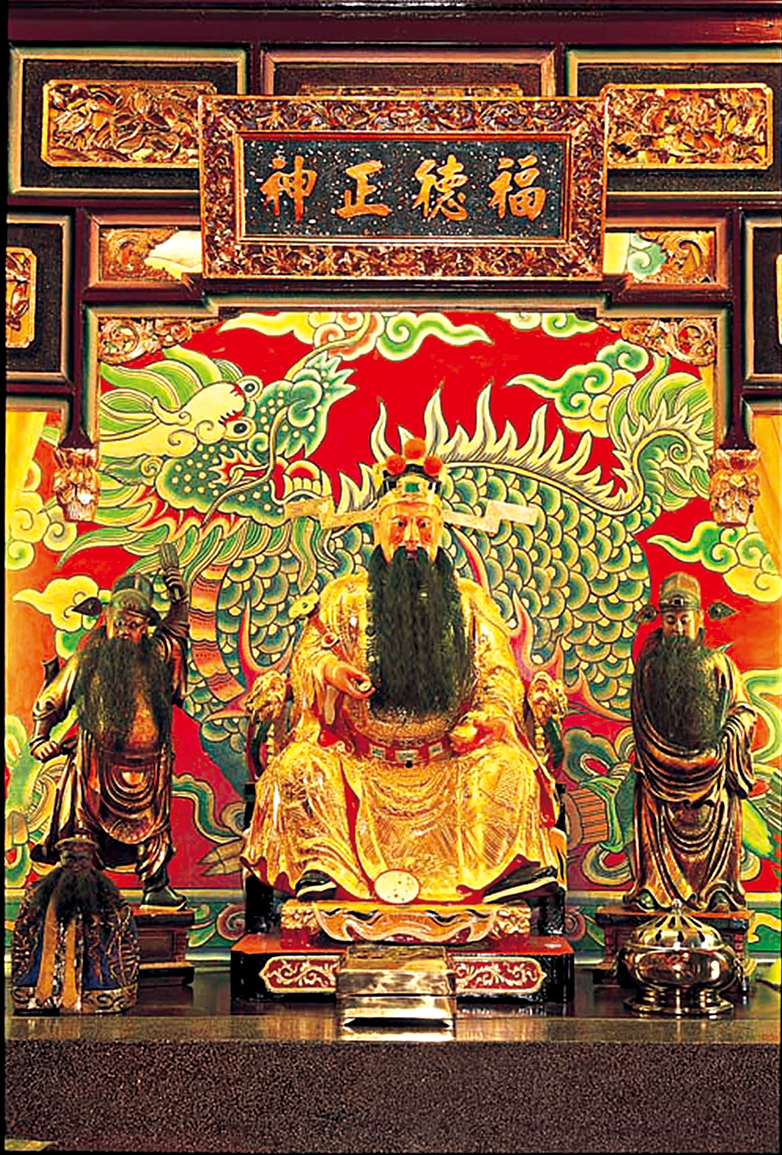